The Greatest Hunting Stories Ever Told: Go Paleo Now, Ask Me How

Many years ago, practically no one in our family had a weight problem. That was because they lived on the frontier where all there was to eat was fish.

My typical ancestor, from the 1730s to the 1930s, subsisted on fish for breakfast, fish for lunch and fish for supper. One of my great-great uncles survived a winter because a storm dumped fish on his farm.

Our ancestors had one hobby they passed down generation to generation. They called it Manifest Destiny and it involved a lot of trout and perch. After 200 years they mostly just picked at their food.

In fact, when I was a kid no one got scolded for slipping fish under the table. I'd pawn off half a trout on the dog, the dog would slip it to the cat, the cat would pass it to the parakeet and we all got along.

When my forefathers became involved in the lumber industry there was more to eat. The trees out here have what we call a cambium layer. Peel back the bark and dig in. I'm not suggesting my ancestors ate cambium, but bears did. If there was a bear caught in the headlights of Manifest Destiny, it was going in the pot. Still, our family and a lot of other families didn't have weight problems.

Don't get me wrong, they wanted to eat, but all they had was hard tack, which was made from flour, water and salt. It was so hard that by the time they were done pounding it with the butts of their rifles to soften it up, the Sioux and Northern Cheyenne had shot them full of arrows.

If the early Europeans had been better planners they would have traded hard tack to the Indians for bison meat and saved a lot of trouble. Fortunately, the later Europeans came along on the railroad and saved their bacon.

Many of these later Europeans brought hogs and fattened them up on scraps of hard tack left laying around by the early Europeans. It was only then our ancestors began to put on weight.

Now a lot of descendants of those Europeans make their homes on what used to be the frontier. Texas, for example, has an obesity problem. A recent report says 66.8 percent of Texans are overweight.

In a similar study in Alaska, 65 percent of adults were overweight, so the obvious conclusion is a person who wants to lose weight should move to a small state like Rhode Island.

To figure out whether you are overweight, calculate your sex and maturity and locate your ideal weight on this helpful chart:

If you weigh more than you should, you might try to disguise it.

My point is you can't really hide an overweight problem, which means eventually you must go on a diet.

Before embarking on a weight-loss program, you should consult your health care professional who has been telling you for years to lose weight.

A calorie is simply a unit of value for measuring heat. I am not making this up. Heat is what you get when you turn up the burner beneath a deep fryer.

To understand how a diet works, you have to understand how your body digests food. The process starts the moment you open the door of a fast food restaurant and inhale the aroma of a batch of chicken nuggets. Mmmmm-mmmm. You want the 20-piece with the ranch dip and the barbecue dip and the honey mustard.

The trick is to know which dipping sauces are good for which parts of the body. It has to do with the color of the sauce and the color of the organ. If you dipped the chicken nugget in ketchup, that bit of food nourishes your heart. If you dip it in ranch, it contributes to your hair and nails. If you dip the nugget in honey mustard, your sinus health improves. Dip something in hummus and it is good for the brain. Dip a chicken nugget in barbecue sauce, you start digging new country music.

If your body gets too much of any one dipping sauce, it turns the nutrients to fat. In fairness to your body, it intends to use the fat later, for various projects to which it is committed, like ending poverty. Generally it just sits there and thinks of excuses.

Diets work when you eat things that are so disgusting, your gag reflex tells your brain to go ahead and use fat it has been storing up. You eat rice crisps for seven days and then binge on a box of Snickers.

A better way to lose weight is to go on a scientific program like the Paleo Diet, which takes its name from the Paleolithic era, a period that lasted 2.5 million years.

1. Take a picture of yourself in a bathing suit

2. Eat foods high in fat, moderate in animal protein and low in carbohydrates (carbs are found in foods composed of sugars and starches with generous amounts of carbon, oxygen and hydrogen - think fried Twinkies).

6. Eat generous amounts of fresh or frozen vegetables, raw and served with fat

10. Cut out dairy products other than butter

12. Take a picture of Charlize Theron in a bathing suit, put your picture on her body then send it to the publisher of this blog

13. If none of that stuff works, eat fish

In fact, the Paleo Lifestyle could be thought of in terms of what a bear would eat if it was eating healthy, not knocking over garbage cans.

Think wild onions in olive oil. Fresh greens in macadamia oil. Steaks on the grill. A blueberry for dessert. Between meals, think in terms of how a bear would exercise. Swim across a lake, climb a hill on all fours, paw through a marmot burrow, tip over all the garbage cans on your street.

I'm sure this weight loss program works, because I Googled weight-loss Paleo results and there were a lot of women in bikinis. Google has a reputation to uphold and accuracy standards to maintain, which is more than you can say about this column.

About the Author: Uncle Geddy is actually Gary Lewis, an award-winning author, TV host, speaker and photographer. He has hunted and fished in eight countries on three continents and in the islands of the South Pacific. Born and raised in the Northwest, he has been walking forest trails and running rivers for as long as he can remember. He is a past president of the Northwest Outdoor Writers Association and a recipient of NOWA’s Enos Bradner and Legacy awards. Lewis has penned over 3,000 newspaper and magazine articles. His credits include Sports Afield, Outdoor Life, Rifle, Successful Hunter, African Hunting Gazette, Covey Rise, Cabela's Outfitter Journal, Game & Fish and MDF.Lewis is host of Frontier Unlimited, a TV show. He is the author of 16 books, including FISHING Central Oregon, John Nosler Going Ballistic, Hunting Oregon and Fishing Mount Hood Country.

Lewis lives in Central Oregon. With his wife of 31 years, Merrilee, he has three daughters, all accomplished hunters and anglers. Visit garylewisoutdoors.com.

The Greatest Hunting Stories Ever Told: The Bringhurst Orchard Monster 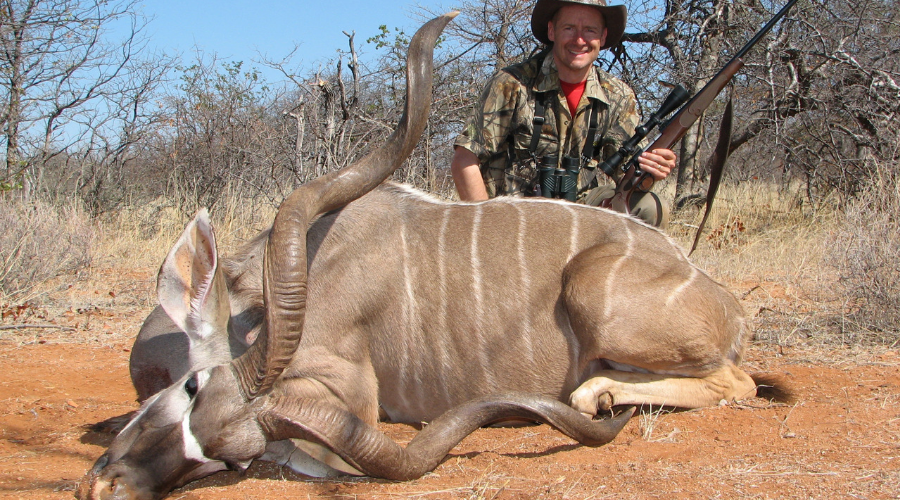 The Greatest Hunting Stories Ever Told: In Pursuit of Kudu